* You will receive the latest news and updates on your favorite celebrities!

What are the Benefits of Avocado Face Masks?

How to Make Avocado Leaf Tea

How to Eat Avocados for Weight Loss

How to Ripen an Avocado – 4 Easy and Quick Methods

2 weeks ago 6 min read
By using our website, you agree to the use of our cookies.
Got it! 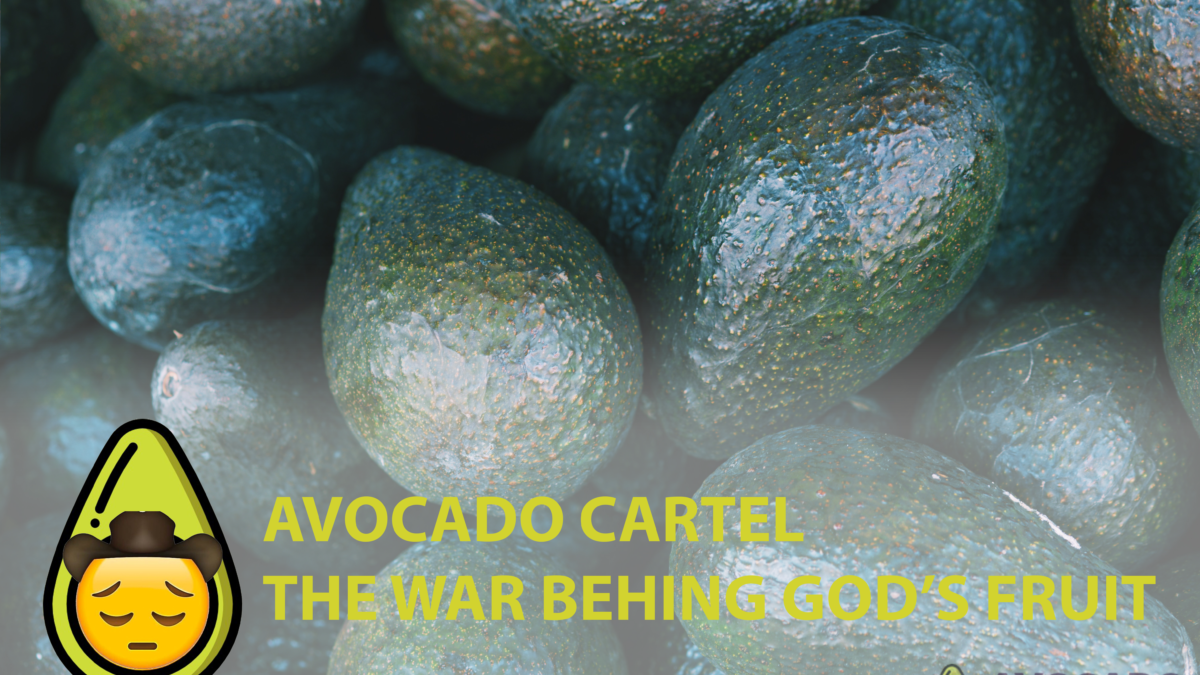 Avocados are incredible – there’s no doubt about that – but there’s a dark scenery behind God’s fruit.

The production of avocados is known to be a multibillion-dollar business for Mexico. This oh-so sought-after fruit has attracted the attention of many and keeps on luring more people due to its long list of healthy components and, of course, its vibrant taste and unique texture.

However, avocado farmers are in what we could call a conundrum: it is true that the avocado industry has raised parts of Mexico out of poverty in just a decade and has given farmers the necessary tools to have a very comfortable life in Mexico, but, on the other hand, the success of the avocado business has now begun to draw the attention of Mexican drug cartels, which have shown to be versatile by evolving beyond drug trafficking and to profitable agricultural production.

Cartels and the avocado industry

Since the US lifted the 1914 ban it had imposed on Mexican avocados (due to fear of pests) back in 1997, Mexico’s avocado exports went through the roof. The state of Michoacán is known to have very rich, volcanic soil and perfect weather to grow avocados, which led many inhabitants to start their avocado groves and sell the product. Nowadays, the state can easily be considered the world’s capital of avocado.

Nearly 80% of the US imports of avocado comes from Michoacán, and of the 43% world imports from Mexico, almost all come from the Michoacán state as well. According to Ernst for International Crisis Group, the profits of the avocado industry in the state of Michoacán alone are worth an estimated US$1.5 billion. The avocado revenue in the whole country goes up to US$2.3 billion per year.

The prosperity brought by the fruit is, though, shadowed by the unwelcomed presence of Mexican drug cartels. The avocado industry in Mexico has avocado producers at gunpoint – figuratively and unfortunately literally sometimes.

Michoacán has become a target of cartel rivalry, which is making both farmers and authorities concerned. Michoacán’s top prosecutor’s office accounts that four cartels (Jalisco New Generation Cartel, the New Michoacan Family, the Tepalcatepec Cartel and the Zicuirán Cartel) are currently fighting for control of avocado trade. These are tremendously strong cartels that are recognized worldwide (the US Department of Justice has labeled the Jalisco New Generation Cartel as “one of the five most dangerous transnational criminal organizations in the world”).

Moreover, according to Falko Ernst, a senior analyst for the International Crisis Group, within these four cartels, subgroups are operating in the state of Michoacán with an extremely unstable system of alliances. The subgroups are frequently on the fields and switch sides potentially every week. The constant switching gives place to an even more chaotic and menacing situation in Michoacán.

Farmers have been complaining about the lack of security and injustice for a long time. They have gotten to the point of running ads in national newspapers begging the Mexican government to help protect their crops from organized crime (“Failing to stop the theft of these lorries will have an irreparable impact on the avocado industry”, one read). With these drug cartels attracted to the massive profit generated by the avocado industry in Michoacán comes escalating violence in gruesome forms, at all times.

Farmers have more often than not been charged protection fees per acre, monthly quotas according to their harvests and ridiculously high rents for the land they own. Avocado farmers have even been victims of blatant robbery – they state that in Michoacán about four truckloads of avocados (48 tons) get hijacked in Mexican highways every day by cartels. If the farmers refuse to pay, they are threatened, along with their families, by the members of the gangs.

Farmers have tried to fight back, but the local institutions aren’t solid enough to face the main cartels. Other farmers don’t rely on the institutions and decided to take it upon themselves to protect their land. They grouped and assumed the role of vigilantes: they guard their crops by hiding in strategic points with heavy firearms to make sure cartel members stay away from their production.

Some have chosen to just invest in insurance for their crops in case they get stolen – which has become a familiar picture. It is estimated that Mexican cartels have collected over US$154 million of Michoacán’s annual avocado profits in only four years.

The growing rivalry in Mexico that leads to violence and threats might, though, pose as a potential destabilizer for the profitable business that the avocado industry has become. An incident in which several inspectors of the United States Department of Agriculture were threatened and robbed by cartel members in Michoacán while following procedures for the avocado certification program has led the US, the number one importer of Mexican avocados, to show an iron fist and warn that such conduct would be punished through withdrawal of orchard inspectors and consequent suspension of the avocado certification program.

The price of avocado has surged due to the US Department of Agriculture’s threat of suspending the avocado certification program and due to the United States President’s threat of closing the US-Mexico border. The concern of farmers has, thus, surged exponentially as well. If Mexican shipments come to a halt, and the United States end up unable to import Mexican avocados, the American avocado consumers might find themselves in an unpleasant situation – avocado imports have grown 16% between 2016 and 2018, making it very difficult for the United States to supply the increased demand that exists currently.

What can we do about it?

After learning about the unwanted involvement of Mexican cartels in the avocado industry, it’s only natural that we begin questioning whether if it is ethical or not to continue to fund businesses tainted by the actions organized crime groups.

Both people and entities have started to take matters into their own hands by boycotting Mexican avocados. Renowned restaurants are in the front row of this decision by dropping avocados from their menus. This choice is based on the certainty that destroying the avocado industry in Mexico will surely stop the cartels’ actions and the consequent suffering of farmers.

Well, boycotting the avocado industry in Mexico will most definitely not stop the cartels for simple reasons.

First of all, boycotting Mexican avocados would be the worst thing we, avocado lovers, could do to the Mexican farmers. Avocado grove owners, fruit pickers, and truck drivers that transport the crops would be the groups to lose the most.

Keep in mind that these are people that found a viable business in a very economically unstable country. As one farmer put it, if these farmers were to lose their avocado business, they would most certainly have to move to the United States and find a new job. By boycotting their products, we would be punishing those who are not to blame at all and play an even bigger role in their distress.

Secondly, these cartels are adaptable. If the avocado business became obsolete, the Mexican cartels would seek different, stronger sources of profit.

Furthermore, if the avocado business picked up again, there would be nothing stopping the cartels from getting involved once again. Drug cartels have become more flexible (in that their profits don’t come solely from drug trafficking), and they simply follow and meddle in lucrative businesses.

Additionally, drug cartels are known to be involved in other agricultural products in the region of Michoacán. Cartels may, in fact, be involved in productions without us, the consumers, even realizing. Therefore, it would be ultimately pointless to boycott Mexican avocados.

The solution for this crisis lies in approaching socio-political issues: gun control, US immigration crises, and stopping drug smuggling. These are the three big pillars of cartels since they give them both tools and profit to become stronger and stronger.

The guns they buy from the United States, the profit they gain from immigration schemes, and the drug business keeps them going with no boundaries in sight. Nonetheless, these are complicated issues to tackle, and it would require far more than the will of conscientious avocado lovers from around the world.

What we can do, however, is to try and buy avocados from farmers that are doing their best to keep cartel influence out of their business. According to The Guardian, the Michoacán’s growers collective Pragor is a good choice because its avocados are fair trade, organic-certified, and identifiable by an Equal Exchange sticker.

Buying Pragor’s avocados is also an environmentally friendly move. Reports allege that the state of Michoacán is in an alarming environmental situation. The massive production of avocados is said to be causing environmental disasters for the region such as (illegal) deforestation, destruction of habitat, and unmeasured pressure on local water supplies.

The difference between Pragor’s avocado and others lies in the price: for a few extra dollars, you will be able to enjoy your avocado dish with a clear conscience.

What are the Benefits of Avocado leaves?

What are the Benefits of Avocado leaves?

What are the Benefits of Avocado Sexually?

How are Avocado and Fertility Connected?

Avocado Listeria – Are We Safe Now?

What are the Benefits of Avocado Face Masks?

How to Make Avocado Leaf Tea

How to Eat Avocados for Weight Loss

How to Ripen an Avocado – 4 Easy and Quick Methods

* You will receive the latest news and updates on your favorite avocado guides, recipes and product reviews!